Up next on the blog are some of my favorite people in the whole wide world! Meet my brother-in-law Reece, his wife Katie and my absolutely adorable baby niece, Rose! Katie and Reece reached out about having their Christmas Card photo taken and I was so stoked to have a chance to snap a few photos of them with their little angel!

We met at their house in Dallas and proceeded to head to Flagpole Hill. Katie is a Portrait Photographer as well and had been doing a few of her sessions there this season. She was loving on all that afternoon light and considering this is just around the corner from their house, it was the perfect spot to set up shop! 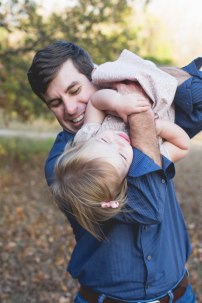 Right out the gate, we managed to snag a bunch of photos of them just loving on their baby girl. Katie was loving the dark greens that were scattered around the park and against her purple dress and Rose’s pink cheeks, the fall foliage would serve as the perfect backdrop. They even managed to recruit a friend, Kristen, to come along and sing songs for my niece and keep Rosie in stitches during our shoot.

Last year’s photo featured this adorable rocking chair and Katie wanted to make sure we got another one of Rose sitting in it. I love the progression images. It is so neat to see just how big Rose has gotten over the last year. It is crazy to think she is going to be TWO soon. Time really needs to slow down. As much as we love watching her grow,  I just want to freeze her at this perfect age. She’s starting to talk and running all over the place but she still wants to be held and she never leaves home without her “WUBY”.  She is seriously the sweetest baby girl. 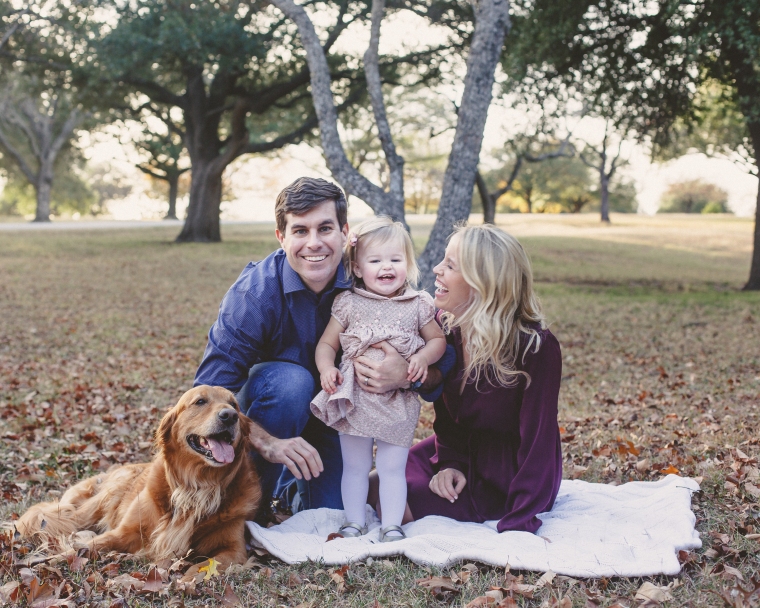 Their Golden Retriever, Dutch, aka Rose’s best pal, managed to make his way into a few photos and I am so glad he did. We weren’t sure about bringing him along just because he’s a bit of an adventurer but I am so glad he came. This pup has been with Reece and Katie since I first met them and I couldn’t imagine their family without him. 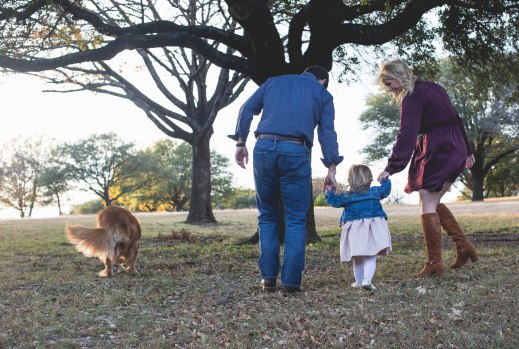 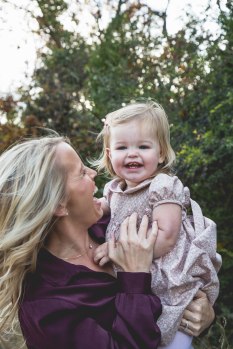 We ended the shoot by taking a small stroll up the hill and stopping for a few images of this trio in a huge clearing amongst the tree line. I am so thankful for this opportunity because I have always admired Katie’s work and I consider them asking me to be their photographer a great honor. I have never met more driven and passionate people than Katie and Reece. Whatever obstacle they choose to tackle, they put their whole hearts into it and I am inspired daily by their commitment to God, family and hard work.

To check out what this Mama has been up to, head to www.fotolanthropy.com. Katie heads a nonprofit organization, FOTOlanthropy, in Dallas, Texas that devotes time and energy into capturing stories about those who have overcome adversity.  Browse their site for more information on how you can nominate someone for their next story or purchase anything from the shop (genuine leather camera straps, tote bags, luggage tags, journals) and 10% will be donated toward their cause!

Reece and Katie recently made headline news when their documentary, Travis: A Soldier’s Story was released on Netflix! If you haven’t seen it, make time and get tissues. It’s uplifting and light-hearted and totally inspiring; definitely worth watching with the whole family! For more information on this film, Travis Mills and his story, check out our  previous blog. It’s jam packed with exciting news about the Mills Family and what they’ve been up to recently. Besides being on Ellen!!! and meeting the President, the Mills Family recently welcomed their 2nd child, a baby boy, appropriately named Dax, after the two medics that saved Travis’ life overseas.

WHAT WHAT!?? This is crazy guys. If you haven’t seen this remarkably uplifting documentary, it’s past time you add it to your Netflix Queue. At the heart of this courageous tale lies a love story about a family who rose to the occasion and proved that life is a matter of overcoming immense obstacles, together.

Travis: A Soldier’s Story is an award-winning documentary showcasing the life of Staff Sergeant Travis Mills of the 82nd Airborne Division. In April of 2012, while on his third tour of duty in Afghanistan, an IED exploded costing Travis an immense loss, his limbs. He is 1 of 5 quadruple amputees to survive the injuries he sustained during the War on Terror in Afghanistan and Iraq.

Upon arriving home, this soldier went to work. He spent months in rehabilitation at Walter Reed Medical Center. While gaining his strength and learning how to take care of his infant daughter, Chloe, Travis used his struggles to help motivate other wounded soldiers. It wasn’t long after that he met Katie Norris of Fotolanthropy, a nonprofit organization dedicated to capturing true stories of those who have overcome adversity through photography and film. From there, the award-winning documentary, Travis: A Soldier’s Story, would take flight. The film has premiered in over 30 cities nationwide, including our great nation’s capital and gained huge press coverage all over the United States. 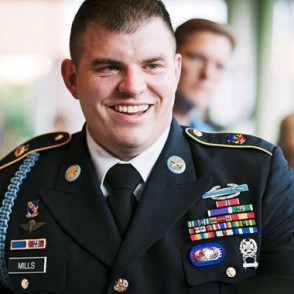 While traveling the country premiering his debut film, Travis continued to push the limits. With the unfailing help from his devoted wife, Kelsey, there would be no ceiling that he couldn’t attempt to crash. From shooting clays in his backyard in Maine, learning to drive a pick-up truck and even skydiving with the United States Army Golden Knights, Travis couldn’t be stopped.

After his debut on the big screen, Travis, along with author, Marcus Brotherton, decided to put his tale to paper and wrote a novel chronicling the before and resilient after of his Alive Day, Tough as They Come. This inspirational New York Times Best Seller is available through the Travis Mills Foundation and on Amazon! 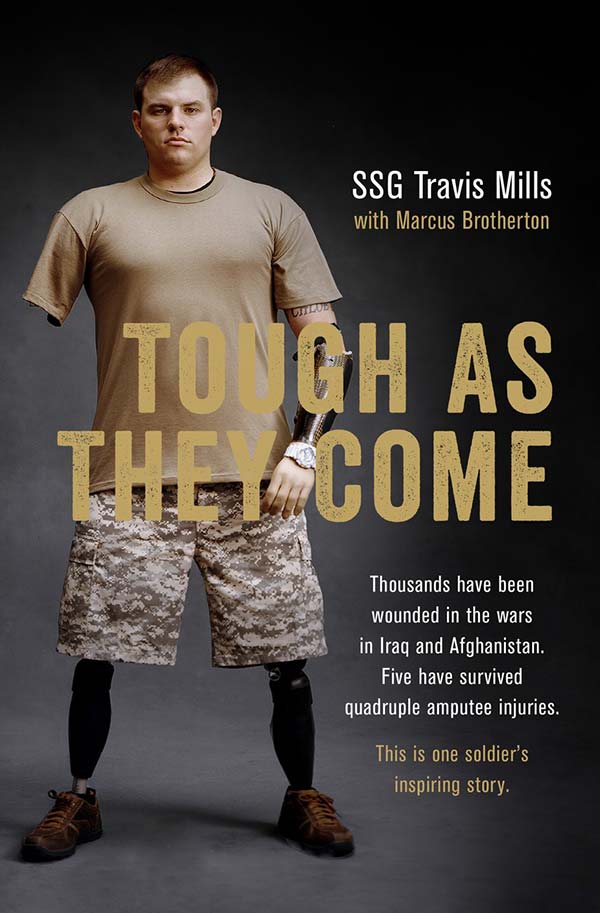 His story wasn’t quite done yet though. He spent time traveling and speaking for motivational platforms and universities. After months of book signings and television and radio spots, Travis, his wife, and his daughter returned back to Maine for a well-deserved gift, their new smart home. Through the generous donations from the Gary Sinise Foundation (Lieutenant Dan Ya’ll), the Carrington Foundation and Tunnel to Towers, the Mills Family would finally have a place to call home. Controlled by an iPAD, this home is equipped with an elevator and a broad range of handicap accessible utilities  throughout the house and on the property. 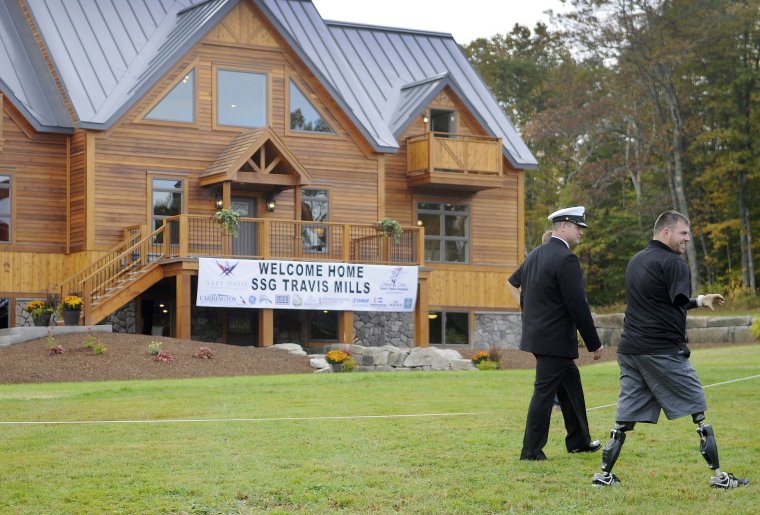 His story and the choices he made after that fateful day in April of 2012 would inspire millions. In true Travis form, he chose to Never Give Up. Never Quit. And now, he’s hoping to help reintegrate wounded soldiers back into society. In September of 2013, Travis created the Travis Mills Foundation, a nonprofit organization dedicated to benefit and assist combat injured veterans. Over the last 2 years, the Mills Foundation has devoted their time to creating a retreat for soldiers that are wounded or suffering from TBI or PTSD. They have purchased cosmetic mogul, Elizabeth Arden’s estate in Rome, Maine and plan to open their doors in the summer of 2017. It’s been years of renovations in preparation for the incoming wounded veterans and their families but Travis says it’s been worth it. He is living a life for those who didn’t make it back and now able to provide a safe haven for our nation’s bravest.

This is not a UCO photo.

He’s not slowing down anytime soon either. This guy and his buddy, David Vobora of Adaptive Training, were recently featured on the Ellen Degeneres Show promoting their missions and sharing some pretty big news…

The Mills family is expecting their 2nd child, a baby boy, this August! Congrats to you guys!! It has been an amazing pleasure watching this young couple’s journey and I can’t wait to see what’s in future!

Travis is redefining what it means to be a wounded warrior. -CNN