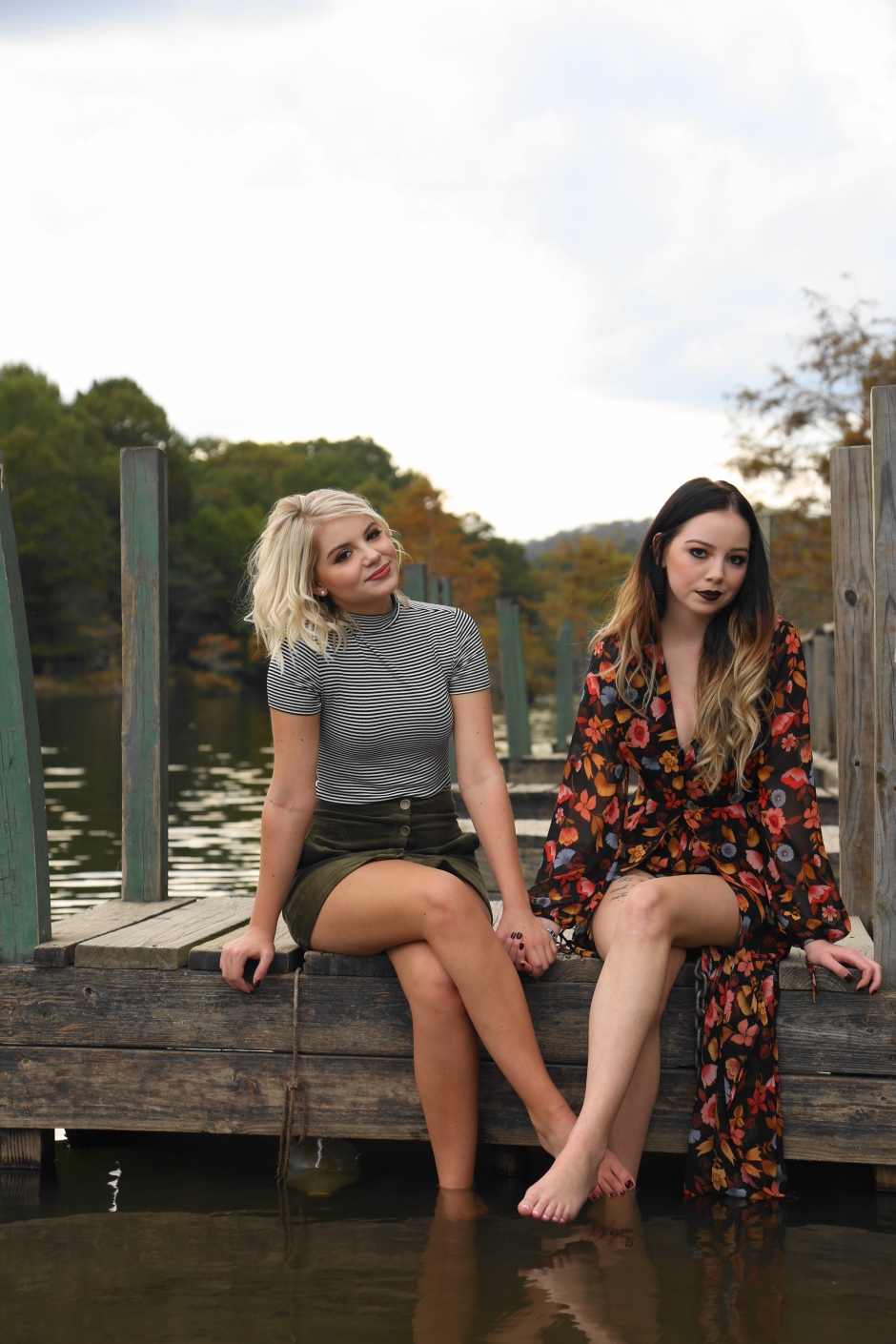 Hey guys! Happy Friday! This week on the Blog, we are highlighting the Tucker Twins Portrait Session at Beaver’s Bend State Park in Broken Bow, Oklahoma. I had the great pleasure of meeting and photographing one half of this duo, Raina, back in the spring. You can view that session with her puppy dog, Pumpkin, here. Since then, I have been itching to get this sweet girl in front of the camera. Luckily for me, Raina and Brooklyn found themselves in need of Senior Portraits and knew just who to call! I was over the moon when Raina reached out to ask about having their photos done in the fall. As the summer months went by, Raina and I kept in contact discussing their vision for the shoot while impatiently waiting for the leaves to change in Hochatown.

Overall, the girls were pretty laissez-faire about what they had envisioned though they did throw a few curveballs at me. Their requests were simple, they were both hoping for rain and they wanted to incorporate smoke bombs and smores! All of which was going to be a challenge but I was up to it and so were they. When we started shooting, I was sure that the girl’s dreams of a rainy shoot were out the window. It was a beautiful fall day. It had been all week. Russ and I even managed to get a kayak trip down the Lower Mountain Fork the day before. After scoping out a few different areas with good light, the girls threw me one last request. “Any chance we could take a few pictures in a canoe?”, they asked. Insert me jumping for joy! I was stoked. I love water shots. I love the way the water plays with the light and how the prisms bounce color and flare  highlighting the golden arch of fall in the Ouachita Mountains.

Once the girls finished up with hair and makeup, we headed to Beavers Bend Paddle Floats to jump in the canoe. I was totally blown away when they got out of the car. Both of them looked so great. Brooklyn was wearing a sheer maxi dress, black booties and her ombre made the oranges and reds in her dress pop every so beautifully. Raina showed up in an olive green mini, black knee high boots and a black and white striped top. I was so surprised by how different they both were but how comfortably they complimented one another. As the girls paddled around the cove and swim beach, I got in chest deep to capture the magic that was unfolding before me. As the sunset over the Ouachita Mountains, we made our way to the second shoot location. 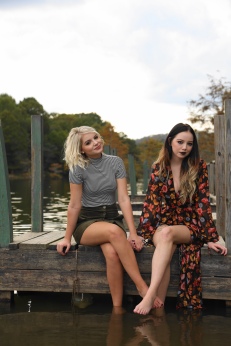 We stopped by a dirt road for a few good lines and eventually made our way down to a pavilion area so my hubby could get to work on building us a fire for our smores shot. We decided to try our luck with the smoke bombs before we lost the light. This was soooo fun! Raina and Brooklyn brought white, blue and orange bombs and stated that they preferred the shot to be in a wooded area. These girls were specific about their vision and it was much appreciated. We scoped out an empty creek bed and decided it would be the perfect place to set off the bombs. We tried the white first and after we put out a small fire, we had gotten the hang of how to set up the second one. The colors were so vibrant and the girls had posed in juxtaposition which made the shots that much more dramatic. Though we scared half the park with the smell of sulphur, the images turned out beautifully. Word to the wise when it comes to using smoke bombs, read the instructions, have water available and be ready to think fast. Before you know it, the smoke dissipates so make sure to have your models ready and willing to move on a clear path. 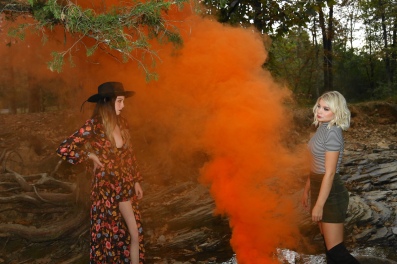 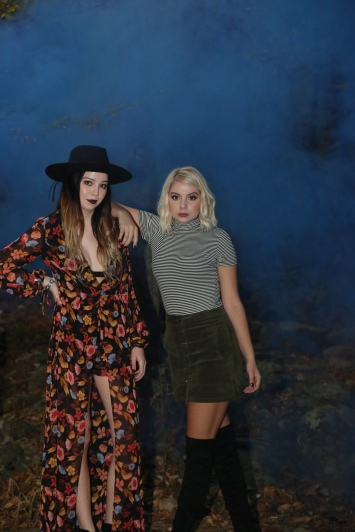 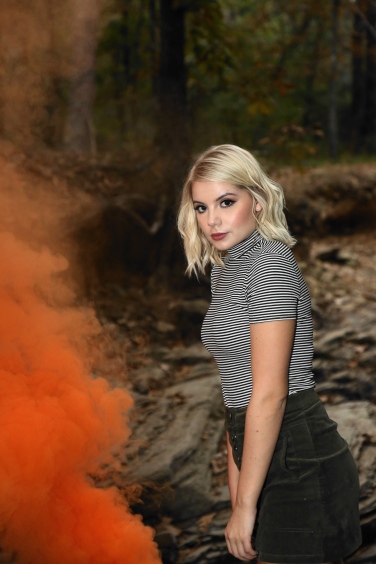 We blew up the last bomb and made our way to the pavilion to change outfits. As we began our way back to the campfire, the first crackle of thunder made its debut. Turns out, the girls’ dreams were coming true. We were going to get rain! I quickly turned my reflector into an impromptu umbrella and we made our way to the firepit. Both of them showed up in carefully worded t-shirts, flannel and jeans. Even with the rain dampening their perfectly coifed hair, these girls braved the lightning to get a few cuddly campfire photos. We burnt a few marshmallows and then closed up shop. 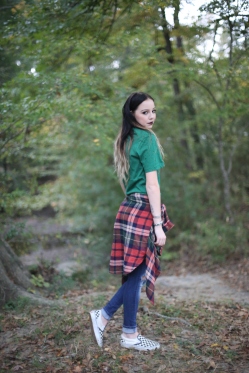 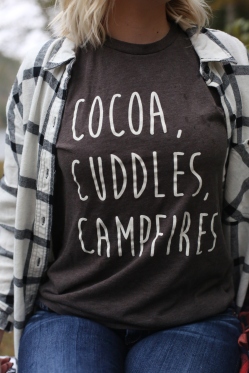 At one point, Raina kept asking me about her makeup and I couldn’t quite understand why. She looked great. It wasn’t until after the shoot that I realized that my makeup was ruined, mascara running down my cheeks and my hair was a mess. What can I say? To get these shots, I had to be willing to swim in a river, run from the flames of a smoke bomb and get soaked to the bone in a full blown Oklahoma thunderstorm. All in all, this was seriously the most fun I have had on a shoot. I love that these girls provided such a heavy-duty challenge and I am grateful that they trusted me to capture these images. They say you should put your dreams out into the universe and that they will come back to you in greater folds. This shoot is proof that no matter the obstacle, one can always rise to the occasion and sometimes, even surpass it!