You read it right! Now that the cat is officially out of the bag, I can share this adorable pregnancy announcement. My good friends, Gian Marc and Emily, are expecting their first child this October! For those of you who don’t know them, get ready to meet the sweetest couple in the world. Or should I say Trio? 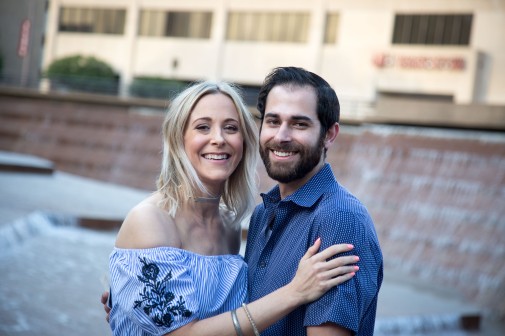 The Capacciolis are an easy gang to please. When it came time to pick a location for their big announcement shoot, they left it up to me so I choose the Fort Worth Water Gardens.  The clean lines make for an exquisite downtown backdrop. Surrounded by brick buildings and glass towers, this place is a peaceful corner for Texans to enjoy an afternoon listening to the water rushing over the expertly engineered falls. 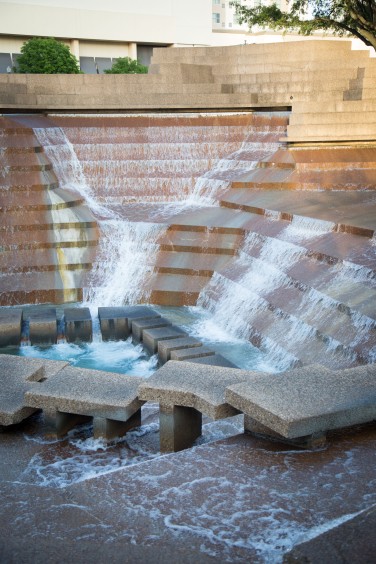 They arrived shortly before sunset and we immediately headed down into the largest water feature. Though an architectural feat, the massive steps down into the falls were a little daunting. They had joked upon arrival that surely I wouldn’t make them go down into the thick of it. Hahaha 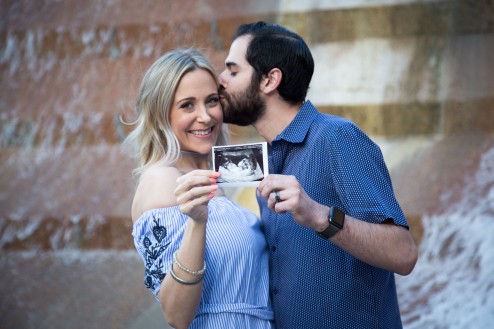 Once we were on the biggest platform, I realized how loud the water was! I could barely hear them nor could they hear me. This was going to be a challenge because I usually shout out poses and direction while I shoot. Since that wouldn’t be happening, I told them to just go love on each other. After a few sweet kisses and snuggles in front of the waterfalls, Emily busted out Baby Capaccioli’s first picture, their latest sonogram! 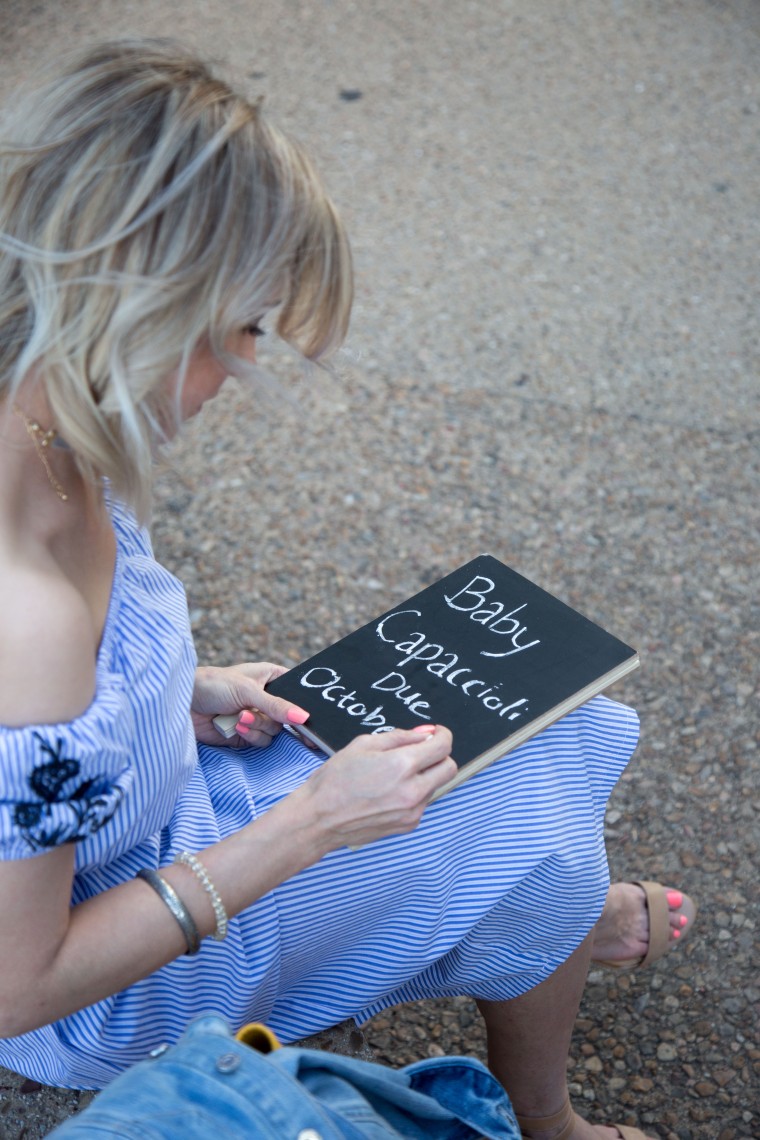 This urban sanctuary is divided into 3 refreshing pools; the quiet, the active and the aerating. We visited all 3 that day but while walking around, I asked Em to write a little something on a chalkboard. The picture above is Emily doing just that. We laughed as they fought over who had better handwriting. It was cute to see them so excited about just writing their news down, let alone sharing it with the world. That’s what I love about these two. They live and love in the little moments.

I met Gian Marc 2 days after I moved to Texas, FIVE YEARS AGO!!! His family owns Piccolo Mondo Italian Restaurant, a staple here in Dallas-Fort Worth, and they hired me just days after arriving here. Over the years, this place has become a home. A home filled with amazing friends, like Gian Marc and Emily. Little known fact, Russ and I got engaged on the same day as these guys. I was so caught up in the fact that Gian Marc was about to propose to Emily that I had no idea Russ was about to bend the knee. To boot, Gian Marc had been in on it the whole time.

It’s so fun knowing that our lives are coming into fruition in a weird sort of unison. We’ve got to celebrate our engagements, our marriages and now, I am photographing their announcement that they are bringing a Bambino/a into the Capaccioli gang! Thank you guys. It was an honor to say the least. Life is good y’all!

During my last visit back to Pennsylvania, I managed to sneak in a little time with a few of my favorite people, the Robb family. This fun trio has been featured on our Blog before. Last fall, I had the pleasure of snapping a few pictures of their little guy, Ben. Check out his session here. This go around was a little different. I found out a few weeks before my arrival that this wild and crazy bunch would be growing by two feet. Yep, they would be adding another Robb to the brood. I was jumping for joy at the idea of them bringing another little guy or girl into the picture and even more thrilled when they asked me to take their family portraits. I was under the impression that we were going to be taking Maternity photos. Little did know, they had a surprise for me. This portrait session would double as a gender reveal! I was so touched and beyond excited when I found out I’d be among the first to know what they were expecting.

After a few snafus with the location choice and timing, we managed to meet at Legion Keener Park in Latrobe, PA. I’ve known Derek and Lizzy since we were kids and I wanted to keep our roots intact to the locale of the shoot. With that in mind, I began to dream up some ideas of how to announce their bundle of joy in a fun way. When Derek and I were kids, we spent many a summer night hanging out by those tracks above the Loyalhanna and I knew it’d be the perfect location for their shoot. The graffiti below the bridge and the train tracks following alongside the lush fields of green created the clean backdrop for these photos. We started about an hour before sunset, making our way from the tracks to the bridge that towers over this creek.

This was a totally different shoot than their first for many reasons. Since the last I saw him, Ben has a grown a foot and gained an adult vocabulary. It freaked me out at first. How could he have grown up so much in the short 4 months since I last saw him? He is so smart and kind. Loaded with his mother’s sweet demeanor and his daddy’s gangsta sense of style, this kid is bound to be a lady killer. Honestly, who doesn’t wanna love on him when he is rocking those sweet glasses? He is going to make for a very cool older brother.

Speaking of his soon-to-be younger sibling…these guys are happy to announce, in the most adorable way, that they are expecting…a baby boy! Due a few days after his big brother’s birthday, we are impatiently awaiting the arrival of the newest Baby Robb!

Thank you guys so much for letting me play a small part in your announcement and I look forward to meeting the newest munchkin! See you guys soon!

If you are looking for a photographer to help you document your next big announcement, shoot Angelina an email at therustienailhead@gmail.com. Whether you are expecting your first or third baby or just recently got engaged, Angelina is sure to make your Session a personalized and unique experience! For inquiries about pricing and packaging for Portrait Sessions, send your questions our way! 🙂 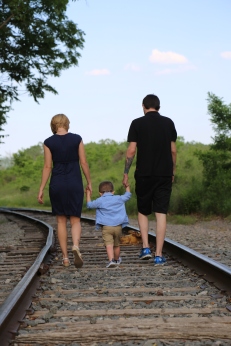 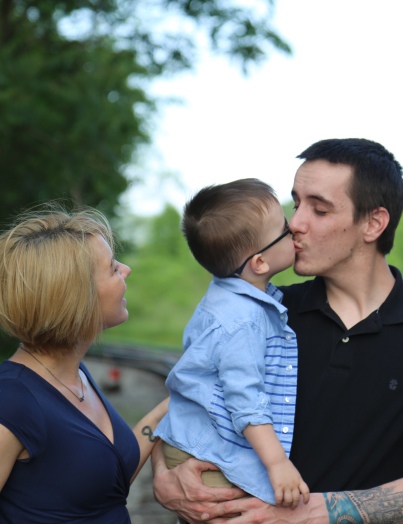 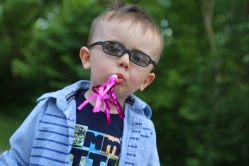 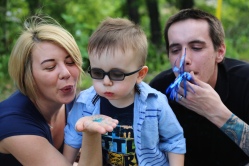