Over the summer, my husband and I had the great pleasure of road tripping through Colorado. While on our adventure, we made our way into Rocky Mountain National Park. Little did we know, they had just opened access to Trail Ridge Road. This scenic byway is a 49 mile long road connecting Estes Park to Grand Lake. Though closed due to weather conditions throughout most of the year, we were lucky enough to have stumbled upon this snow laden path during it’s first week of availability.

This road soars high above the treeline to 12, 183 feet. As you climb to meet the Alpine Tundra, you can feel the climate change a dramatic 20-30 degree colder. I was happy to have my jacket, to say the least. As we started the epic climb, we were mesmerized by the abundant wildlife, streams and wildflowers. We made our way to the Tundra World Nature Trail and happened to notice that something special was going on near the entrance.

At the top of the mountain, Mike Wojtowics got down on one knee to ask Heather Lamberson if she would be his forever. I waited until after they had celebrated a bit and came down to introduce myself. I congratulated them and asked if they wouldn’t mind if I snapped a few pictures of them, ensuring that I would email them the images when I made it back to Texas.

I was thankful to have witnessed something so beautiful in such a magical place. After a few back and forth emails, Mike was nice enough to fill me in on the details of their love story. He told me that they had met where he works, building boats for the military, last March. Two months later, they were an official couple. Mike chose to propose at the Alpine Visitor’s Center for 1 of 2 reasons. He explained that this locale was actually where they had their first date and that those mountains were particularly special to him. Mike called it his “safe place”. He said, “On top of one of the other peaks is where I picture myself when I need to free my mind during stressful times, so I figured bringing her to my safe place would show her that I was letting her into my life 100%. No holds bar!!”

Mike will tell you that Heather had no clue that he was about to propose and from the look on her face, I’d have to say he was right. It was a genuinely beautiful moment. The couple has yet to set a wedding date but they are thinking of tying the knot in the fall of next year, in the mountains, of course! And, as if this love story couldn’t get any cuter, Mike & Heather announced to the world just this weekend that they will be adding Mom & Dad to their resumes in 2017. The couple are expecting their first child this April and we could not be happier for them! Congrats to these two lovebirds! We wish you all the happiness in the world! 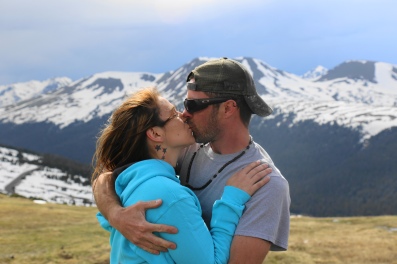 To find out more about our epic 9 Day Road Trip around Colorado, head to this link. We whitewater rafted Clear Creek, kayaked Grand Lake, hiked St Mary’s Glacier and took an off roading Jeep tour in Rocky Mountain National Park amongst many other things. Our entire adventure is outlined for those of you who are thinking of traveling to Colorado!